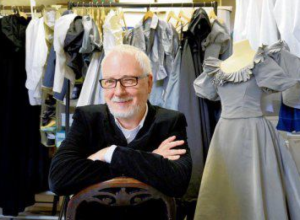 Peter O’Brien was born in London to Irish parents, returning to Ireland as a child. Receiving a traditional education, he left secondary school early, going to work in visual display in Dublin department stores.

At 19, Peter moved to London and worked in display in Marshall & Snellgrove (now Debenhams). On the advice of British fashion editor Eve Pollard, to whom he had shown some sketches, he applied to Saint Martins School Of Art and was accepted on a foundation course. After completing a three-year degree course in Fashion Design, he graduated with 1st class honors. Peter then completed a post-graduate course at Parsons School of Design in New York.

Upon graduating, Peter moved to Paris where he worked at Christian Dior under Marc Bohan, at Givenchy, and as a senior designer at Chloé . In 1989 he was appointed creative director at Rochas, where he remained for 12 years, designing women’s wear and accessories, and overseeing menswear, perfumes and licenses.

Peter returned to Ireland in 2004 where he has since been working as a freelance designer, creating collections first for retailer AWear and now an exclusive capsule collection for Arnotts department store.

In 2005, Peter started designing for theater, utilizing his skills honed in the ateliers of Paris and calling on the services of a unique range of craftspeople and suppliers from his years working abroad. To date he has designed the costumes for numerous plays at Dublin’s Gate Theatre, including ‘Lady Wyndemere’s Fan’, ‘The Constant Wife’, ‘Private Lives’, ‘Present Laughter’. He has also designed costumes for ‘Pygmalion‘,  at The Abbey Théâtre, Dublin.

In 2013, he was costume designer on the film ‘The Price of Desire‘ (dir: Mary McGuckian), based on the life of furniture designer and architect Eileen Gray.